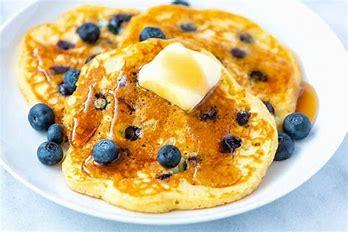 While putting blueberries in pancakes is a more modern practice, this history of pancakes probably goes back several centuries. Originally pancakes would not have been as sweet as they are today, but the creation of a paste made from wheat that is then fried in a pan, or even directly on the hot ashes of an open fire, may go back as far as 30,000 BC, during the stone age. In fact, researchers have found something like pancakes in the stomach of Otzi the Iceman, who was preserved in the ice for at least 5000 years! Of course, various recipes for these early versions of pancakes eventually developed to include milk, eggs, oil, fruit and even ingredients that wouldn’t be used today, such as cheese, potash or cabbage. But because blueberries are native to North America, it took some time until they were part of the evolution of the pancake. Today, blueberries are known as a “superfood” but even hundreds of years ago, Native Americans knew how great they were and would use them for medicinal and health purposes. Once Europeans made their way west, they learned about how amazing blueberries truly are, but they still continued to only grow in the wild until the early 1900s, when a farmer and botanist were able to domesticate them. Eventually, settlers in the New World began including blueberries not only in their own recipes but also in other products such as cosmetics and alcohol. And, eventually, of course, they made their way into pancakes, which is the very reason for the celebration of this particular day. And now, it’s time for the celebration of Blueberry Pancake Day!