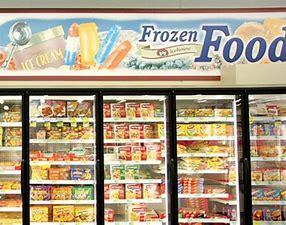 Frozen foods have been around for a while, and many people were involved in the development of the safe food freezing processes of the modern-day. Because it takes more to freeze food safely than simply sticking it on ice! Originally, the slower processes of freezing food caused large ice crystals to form that would ultimately degrade the quality, flavor, and texture of the food. In the mid-1920s when several scientists were searching for better processes, faster processes changed everything. Clarence Frank Birdseye II, a biologist for the US government, set up Birdseye Seafoods and developed the quick-freezing process that included specialized pre-packaging. After earning the first frozen foods freezing process patent in the United States in 1927, Clarence Birdseye created the Birdseye company. He and his company are now considered to be some of the founders of the frozen food industry. Frozen foods, no matter how conveniently prepared, at that time would still have been heated within the traditional oven, which was time-consuming. It wasn’t until the early 1940-50s that faster, easier heating options would begin to come into play. In 1945, the microwave was accidentally discovered by Percy Spencer, an American self-taught engineer. After this, the scientific concept was bought and patented by Raytheon for Spencer’s microwave cooking process. During this same era, TV dinners were developed in the US and, in 1950, began to be sold by the Swanson company, which became the first frozen food dinner to be highly successful. Once microwaves became accessible to the general public throughout the ’70s and ’80s, US President Ronald Reagan memorialized frozen foods by proclaiming Frozen Food Day as a U.S holiday in 1984! Back in these times, grocery stores may have only dedicated one small section of their selling floor to frozen foods. Today, however, stores often make room for several aisles of frozen foods from various companies that allow consumers to reheat readily made foods in under 30 minutes. Today, organizations such as the National Frozen & Refrigerated Foods Association (NFRA) in the United States celebrate the day. Frozen Food Day is meant to bring to light the benefits that frozen foods can have towards saving money and bringing families together for a meal.